Faces of the Rescue 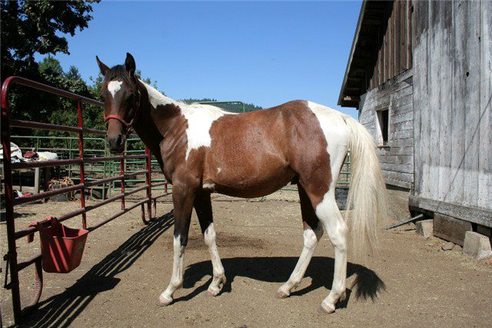 Well, he is here, and his name is "Pistol Packin' Pete".  Pete was rescued by Susan and Tom at WWAR (the SANCTUARY), We are the foal division and the Woof Project (dog division) is run by Sonya Spencer.  The three of us together make Whispering Winds Animal Rescue.   Tom and Sue started in 1989 and incorporated in 2006.   Susan found Pete tied to a pole, choked out at 6 months of age.  He was choked and roped to a post, (they couldn't "catch him)"  where he passed out, causing the fence to fall on top of him, crushing him.  Susan told the people to "cut the rope".  (Of course it was yelled with much more colorful words, and enough fury that the guys took a knife and cut him loose before he died).  Hmm,  wonder what issues that caused??  He was taken to Whispering Winds and cared for by Sue and Tom, and later adopted out.  He was since returned to WWAR.   He is now the newest resident at the foal rescue (even though he is older - 4 1/2). 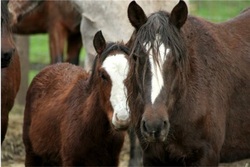 The foal is "TUCKER", and he was a Virginia Range Mustang and his
mama was part of the fertility study program through the Nevada
Department of Agriculture.  His mama died from "unknown causes -
stress maybe?" the day after arriving in a truck crammed with 33
horses including mamas and babies.  He was raised at WWAR and then
moved to Chilly Pepper - Miracle Mustang (Orphan Foal Division).  He
was then later reunited with other Virginia Range mustangs back in
Nevada. 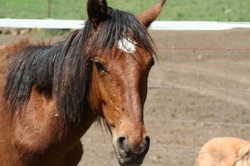 This is CALEB,he was also part of the study and also arrived at WWAR in the same crammed truck.
He went with Tucker to be reunited with other Virginia Range mustangs back in Nevada. 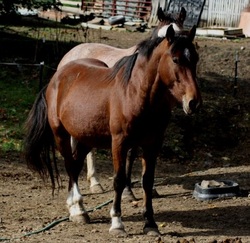 This is Rebel.  He now resides (as a gelding) at WWAR.  He was an orphan from another sanctuary in CA.  He was raised at our place in Shingletown.  He has his own band and does everything a real stallion would.  He loves them, protects them, "covers them", and does everything but
actually make more babies.
Powered by