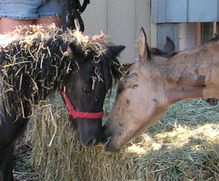 Deafness in horses can result from a number of causes, including inner or middle ear infections, an arthritic change in the skull called temporohyoid osteoarthropathy, old age, trauma, ototoxic drugs, and congenital deafness related to coat color in Paint and pinto horses. A horse’s hearing can be checked with a brainstem auditory evoked response (BAER) test, which is also used in humans. The BAER detects electrical activity in the cochlea (inner ear) and auditory pathways in the brain in much the same way that an antenna detects radio or TV signals. The test is relatively simple and is offered in most university veterinary hospitals.

Without this definitive test, you can get a presumptive diagnosis of deafness by observing how she responds to auditory stimuli outside of her visual field. For example, you can stand just out of her sight and shake a can of grain. A deaf horse will not show any excitement in response to the sound.

One of the most common forms of deafness today is coat-color-associated deafness in a minority of splashed and possibly frame overos. These horses are born deaf and exhibit a flatline response to a BAER. A similar syndrome causes deafness in white, blue-eyed cats and Dalmatian dogs. I want to stress that only a small minority of overos are deaf. The biggest repercussions of owning a deaf horse involve modifying your training techniques. Because these horses cannot rely on voice cues, they must be trained using visual cues on the ground and tactile cues under saddle. The only other major consequence is that you must make sure your horse is not startled by the unseen and unexpected approach of people or other animals.

With visual and tactile cues, deaf horses do very well. I have owned a deaf mare for 24 years, and most people never notice that she cannot hear. I have ridden her on trails and in the arena, and have shown her without incident. I also know of deaf horses who are successful cutting horses and all-around Western and English show horses. One advantage of owning a deaf horse is that she will never spook in response to loud noises.